Garrett has been directing this eclectic group of creative misfits since 2005, and he’ll be the first to tell you that managing creative people is like trying to eat soup with a fork. He’s not even sure what that means. Just know that managing creative people is like trying to catch the wind. Wait, yes, that’s a much better analogy. But he loves every minute of it. If you asked him 10 years ago to wave his magic wand and put himself in a career he loves, this is it! The creative passion of his team members fuels and refuels his excitement to come to work each day.

Garrett has a master’s in mass communication and a bachelor’s in English/creative writing. He writes fiction and produces music when he’s not at work. When he is at work he shoots video, voices projects, and basically tries to keep the creative machine moving. Multimedia specialist / videographer of the Creative Services team. He writes, shoots and edits news stories for the web and broadcast outlets. In addition, he handles the video production for UF Health. Chris has 15 years of experience working in broadcast news and health care marketing and communications. Her creative expression began to evolve while growing up in the Midwest in a large family. “We used our imagination to entertain ourselves,” she says. In her teens she began sketching and she developed an interest in fine art, taking drawing classes on the weekends.

Mary earned a BA in graphic design from University of Florida and worked in the Orlando advertising agency environment as an art director and creative director designing and branding for clients in education, real estate, health care and other industries before relocating to Gainesville in 2011.

Mary begins every project by stepping back, taking a big picture view, and asking, “What do I want the end user to do as a result of seeing this piece? It puts the entire project in perspective. I love telling my client’s story in a way that maybe they hadn’t thought of.” The creative bug bit Madelyn back in the ’90s when she traveled around Europe and Asia. Being an accidental tourist opened her eyes to all types of design, from packaging and environmental design to editorial design. The idea of visual communication really intrigues her not only because it prevented her from eating something disgusting or going into the wrong bathroom while abroad but because of its immediacy. Madelyn feels that design has a purpose in all of our lives. Good design is iconic; it can define eras. Wow. She just blew her own mind.

Madelyn has been a trained professional designer for 13+ years. She loves what she does, but if she wasn’t a designer she’d probably be the female version of Anthony Bourdain. She shares her time with a very dapper Morkie named Jaxson and her significant other, Mitch. 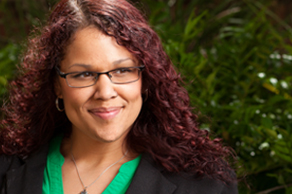 Selena believes that design changes the world. She makes it her responsibility, joy and, well, obsession, to “think farther, fail harder, empower and engage.”  Spoken like a true expert – that is her motto, by the way – she developed this way of thinking over the past 11+ years.

While in school and after graduation in 2003, Selena worked with the UF Foundation. She left UF to teach graphic design theory and application, lead art direction and design teams in advertising agency settings, and most recently pursued a full-time freelance career while having her first child. She is excited to be back with the UF family and is stronger and more empowered than ever! She can design a giant dump truck and then bench press it over her head!

When she’s not designing or thinking about design, she enjoys painting, planning her family’s meals and getting sucked in to intriguing documentaries and good conspiracy theory conversations. But most of all, she absolutely loves exploring the world with her daughter. A graduate of the University of North Florida with a bachelor of fine arts degree with a concentration in photography, Jesse is competent in many photographic techniques including both film and digital based imaging.

In addition to making extensive use of natural light in his work, Jesse is familiar with a vast variety of studio lighting techniques and equipment, including Dynalite, Alien Bees, Calumet, Novatron, Photogenic, Speedotron and Pocket Wizards.

When not using the vast collection of photographic tools at his disposal, Jesse can be found teaching Wing Chun Kung Fu, mountain biking or riding his motorcycle.